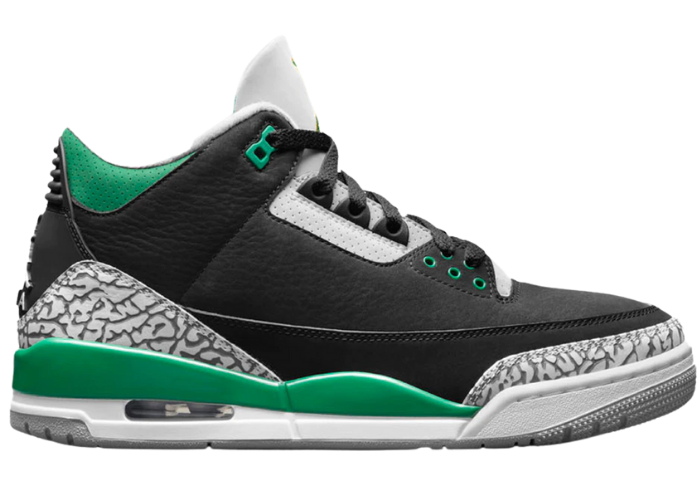 The Air Jordan 3 Retro “Pine Green” is a new twist on the classic “Black Cement” colorway. Featuring the classic looks of the AJ3, with a black-based upper and elephant print detailing. In addition, this pair sports genuine nubuck throughout the upper, eyestays, tongue and collar, as opposed to traditional leather. Pine green accents, a 3D embroidered “Jumpman” logo on the tongue that gives off old-school Seattle Sonics vibes and a white midsole complete the look.

Originally released in 1988, the Air Jordan 3 has become one of the most popular sneakers of all-time. The first Air Jordan sneaker designed by the legendary Tinker Hatfield, they also served as the debut of the “Jumpman” logo we all know and love today. This replaced his original “Wings” logo that was found on the AJ1 and AJ2. The Air Jordan 3 was also the first signature sneaker of Michael Jordan to feature a visible Air unit in the heel.

The Air Jordan 3 Retro Pine Green was originally set to release on November 13th. However, they will now be dropping as a GR (general release) on October 30th, 2021. Expect these in full-family sizing from men down to toddler. This sneaker will launch via Nike & select stores for a retail price of $190 in men’s sizing. They will also debut new packaging.