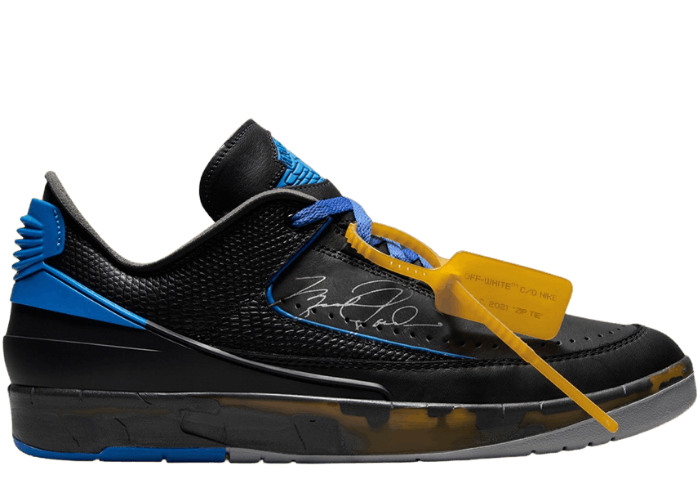 The Air Jordan 2 Retro Low SP Off-White Black Blue edition is one of two limited edition colorways made in collaboration with Virgil Abloh’s streetwear imprint. This pair draws inspiration from Michael Jordan’s original white and red pair. They come in an all-new black and varsity royal. Featuring a black-based leather upper with royal blue and grey accents. MJ’s signature is found on the lateral sides, Off-White branding on the medial sides, a 3D designed “crumbled” midsole and custom zip ties finish things off.

The Air Jordan 2 was originally released in 1986-87. The second signature sneaker from Nike made for Michael Jordan, they were designed by Bruce Kilgore. Made in Italy, the Air Jordan 2 features faux lizard skin, sleek lines, no Swoosh branding and Italian leather. The Air Jordan Wings logo is found prominently on the tongue while Nike branding adorns the back heel, insoles and bottom of the outsole. They were originally released in two colorways in both high and low-top. In 1994 they retroed for the first time and then again in 2004-05. The Air Jordan 2 was also the last signature Air Jordan sneaker to feature the Wings logo as the Jumpman was born and debuted with the AJ 3.

The Off-White x Air Jordan 2 Retro Low SP “Black Blue” is set to release on November 12th, 2021. It will launch via Nike & select stores for a retail price of $250 in men’s sizing.